This is the main YouTube video but it is blocked in USA, Canada, Germany and Bermuda:

This is the alternative Vimeo video that should work worldwide, if you have any problems then email me:

Haha so there it is: possibly the stupidest thing I may ever put to film. 🙂

Filming it took days and I mean days, over several countries using all sorts of different techniques. So here’s the “making of” page that also gives credit to all the people who helped me make this video exactly what I wanted it to be.

As this is a solo trip, all of the footage with the camera still, was done by be placing the camera on something nearby and usually riding past the camera and hoping it would still be there when I got back.

I used a “Joby Gorillapod” to hold my Panasonic Lumix DMC-FT3. This is the only camera I have had for this trip. The Gorrilapod is brilliant because it can grip onto anything, or stand on any uneven surface. 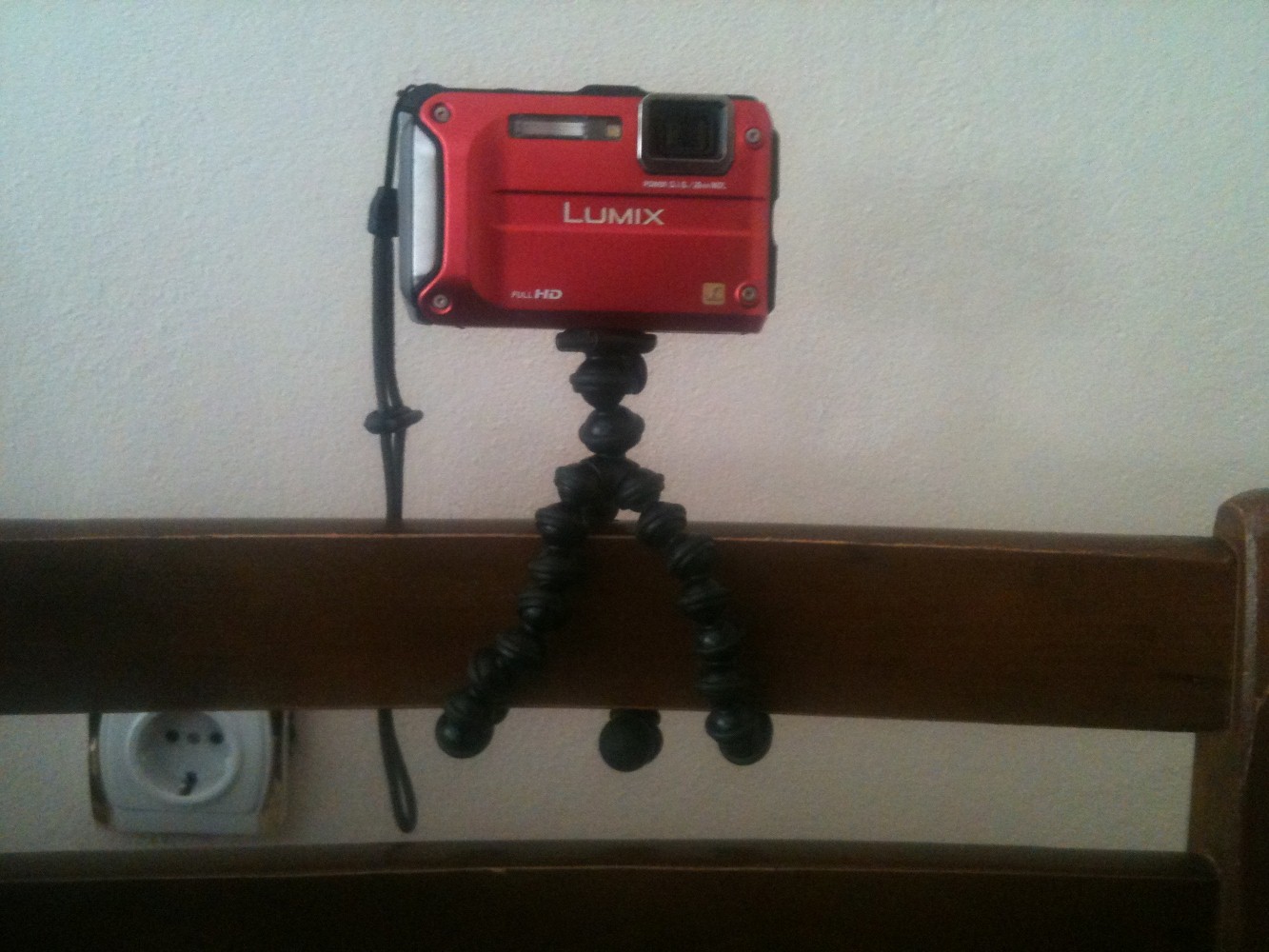 The ice riding footage was filmed in the UK on my iPhone during a ‘bad winter’. While all the car and big bikes were cowering indoors, I was out having an awesome time playing around on the snow and sheet ice. As is shown here: http://www.c90adventures.co.uk/index.php?option=com_content&view=article&id=60&Itemid=56 A c90 is a pleasure to ride on ice and snow, rather than a problem.

All of the other static footage is quite self-explanitory really, but now I need to thank the people who helped me:

Filming this was an interesting experience. First I had to find a shop that sold keyboards and buy one. Yes I actually bought an entire fully functioning keyboard in Bangkok for the purpose of 20 seconds of footage lol. That’s the lengths I’ll go to, to get a laugh and a donation to my charity.

It took a few days but I found one, that was the easy part. The next part involved finding a section of quiet road (inside Bangkok!) and then hiring a Tuk-Tuk to drive in front of me at a constant speed while someone sits in the back and films me playing. This was all made possible by a lovely Thai woman called Fai who not only did the filming, but also managed to somehow convince the Tuk-Tuk driver that this was a good idea haha. Without her I doubt I would have been able to get this section to work.

And this is the Tuk-Tuk driver with his son to the right and his wife hiding behind the door.

This is the camera vehicle itself.

This part presented quite a problem; have you ever tried buying a drum kit in Iran? I searched for days and days but couldn’t even find a children’s one. So I had to get creative.

For the symbols I removed the mirrors and in their place, I put some M10 threaded bar. Then I bought two aluminium dinner plates and got holes drilled in them at a local garage (that took some explaining haha) and bolted them to the top of the treaded bars.

For the drums I bought a selection of plastic buckets and just sellotaped them to the handle bars and used some wooden dowel as drum sticks.

This is the finised ‘drum kit’. Not too bad if you ask me haha

Then there was the filming…..this took a long time.

On the Ferry into Iran I met two Germans riding DR350’s from Dubai to Germany. I helped them with all their customs paperwork and getting them cheaper insurance, so they agreed to help me do some filming……..oh how they regretted that hahaha.

This is the ill-fated duo, Angelika and Maike (I’m sure I’ve spelt his name wrong so I’ll correct it as soon as someone send me an email)

This is the camera bike. As with most things on my trip, I always forget to actually take decent photos of things so this, like most pictures here, is taken from a random video we shot.

Maike was riding the DR350 with Angelika sat on the back (BACKWARDS!) holding the camera and filming me on a tiny screen in bright sunlight and a strong wind.

This section took over 3 hours to film in the end. I’ve lost count of the number of takes, but good god did it take a lot!

I hadn’t really comprehended just how difficult it is to:

2) Singing the lyrics to a song, perfectly and in time, while

3) Playing the drums (which isn’t just repetation, every drum role is different), while

4) Keeping the C90 the correct distance from the camera (she’s on full throttle and I control the speed with the rear brake), while

5) Only watching the road and traffic with my peripheral vison because I’m looking into the camera the whole time, and….

Right from the beginning I was so close to getting it right but it was the drum rolls that were the problem. Every drum role and symbol smash is different to the last so you need to know where you are in the lyrics and the drum roles. One small mistake and the whole take was a write-off and you had to turn around and start it all again.

But finally we managed it and I would like to very heartily, say thank you to Angelika and Maike. Without you it wouldn’t have been possible.

As I write this I’m staying with the Istanbul Motorcycle Club which is where they let me use their high speed internet, fix the bike and film the Haynes Manual piece and the Kicking Over section. Granted, they think I’m mad, but they’ve been very accomadating, helping me out with everything I’ve needed and more. I’ve been staying with them for over a week now while editing this video and others and the two blokes who run it; Mehmet and Hadi, are awesome.

This is the bike club

This is Mehmet. Apparently he has been told by Hitler to destroy my motorcycle (click here if you’re now very confused http://www.c90adventures.co.uk/index.php?option=com_content&view=article&id=77 ) I will also take caption suggestions haha.

And this is Hadi; who is a proper old-school mechanic. He knows everything about everything mechanical and showed me a thing or two while we fixed little 90.

I’ve had a few people ask me how I ride the C90 without holding the throttle, so I thought I’d explain my ‘Cruise Control’.

On a C90 it’s really simple; all you do is slide an iPhone cable inbetween the twist grip and the switch gear like so:

The iPhone cable is the perfect size, it still allows you to twist the throttle to what ever position you want and it will just hold it there. If you need to slow down, you just shut the throttle. And when you reach the speed you want to go, just let go and the throttle stays there.

Also bear in mind that I only have 7 horsepower so full throttle isn’t exactly hyperspeed. I do not recommend doing this on a 100 horsepower BMW for example.

In fact for legal reasons I don’t recommend this or anything I do…. ever.

Such is the modern world, I only recommend that you stay indoors, take up knitting and let the news and the government decide all of your opinions of what is good and bad in the world.

So yeah, thank you everybody who made this video happen. I’m really happy with the end result and it’s everything I wanted it to be.

And remember; life is a gift, have a laugh.

Latest from Malaysia to UK

UPDATE!!!! It’s done….it’s actually done!!! Head to https://c90adventures.co.uk/product/malaysia-to-uk-digital-download/ to get yourselves a copy
It’s done! It’s finally actually properly done. It nearly killed us all
So….Europe The trip was coming to an end. In Turkey I had
Sorry for the delay on the Europe/Final Update. I’ve now jot
So then….Turkey Turkey was a strange country to ride through, I
Go to Top